Lisa Hammond’s Moving House is a startlingly beautiful first collection of poems made of careful noticing, especially of the natural world. But more important than the naturalist’s accurate observation is the depth and delicacy (an oddly effective pairing) of an imagination that, in her best poems, transforms self and reader. —Susan Ludvigson

I love how attentive to the world these poems are, the way they illuminate the small wonders that surround us. Lisa Hammond is a gifted poet, and this collection should gain her many appreciative readers. —Ron Rash 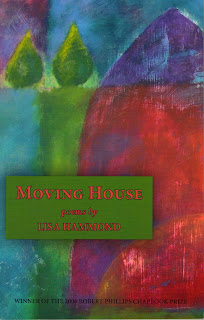 The poems in Moving House are grounded in the sometimes haunted landscapes of South Carolina, a setting rich with the flavors of ripe peaches and tomatoes and fresh caught shrimp. The speaker of these poems turns her attention to the ordinary objects of her Southern home, seeing artistry in the scales of a fish, the pearly buttons of a linen shirt, a missed eclipse, a sprig of morning glory run wild. In the interaction between story, history, family, and memory, these poems find meaning rooted in the land, a source of both fear and wonder.

Off Highway 17, watch for the old man
with the red truck, the handwritten produce sign:
tomatoes, watermelon, peaches, shrimp.

Think who will eat them. Sharing shrimp
is a measure of your love: half pound apiece.
A pound for true devotion.

At home, wash each shrimp, the water just above
a trickle. Be careful: the sharp edge can catch
you, the soft place on your palm.

Season the boil with Old Bay. Fresh shrimp
still remember tidewaters, the taste of brine
an echo you must outweigh.

Pull off each shell, hear the crunch of sand
under your feet. Taste black mud, salt air,
each dark vein a history.


Around 1815, a stone monument was erected on the west bank of the confluence of the South Fork and Catawba rivers. It marked a critical corner in the much contested 401-mile state line that separates the two Carolinas. When the Catawba was dammed a final time in 1925 to create Lake Wylie, the three-foot-high stone obelisk disappeared beneath the swirling waters.
—Dan Huntley, The Charlotte Observer

The last surveyors marked a tree every mile, numbered
each one: long leaf pine blazed to stand witness,

long fallen now, markers not even a memory—
and that before the waters rushed in, damming

as divers draw boundaries like the long chalk line
on the children’s floor, faint marker of separation,

more dust. Consider the permanence of lines drawn
in water: no echolocation can trace old edges, so faint,

hiding a line that existed unobserved, or never existed,
may yet be mapped by surveyors of our ancient world.

What story this stone tells, what marker lies mute,
what matters this line, past echo of divide.