Today’s been one of my favorite odes so far—beautiful language here.  But I went for an Easter hike with my husband and son at Congaree today, and I’m too tired to do the poem justice, so here’s a snippet and an image, and the whole poem is here. 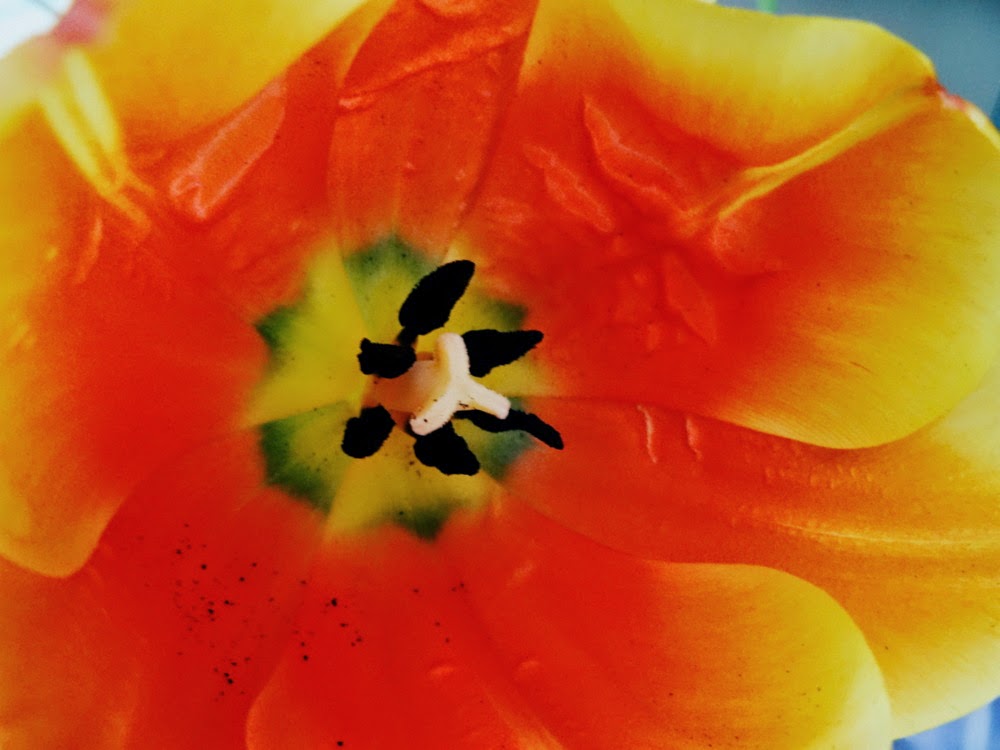 Edit: Clearly I will never make much of a blogger. Perhaps, though, I should be nicer to myself and just remember next year not to attempt even small new blogging projects in April when school is ending and faculty senate is blowing up. Pablo, I still love you. xoxo
Posted by Lisa Hammond at 10:42 PM

"he who loves and he who dreams / came and went from bed to bed." 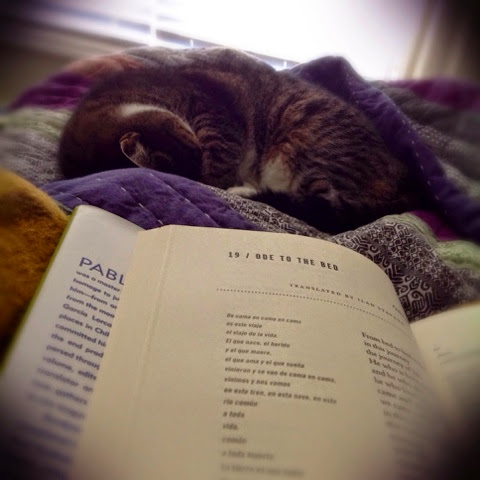 “Ode to a Beautiful Nude”

Just a day or two ago, the Met’s Twitter feed featured one of their paintings that had made the Guardian’s list of the top 10 male nudes in art (why is everything a top 10, or 6 things you need to know, or some easily quantifiable list?).  While Neruda is not writing about male nudes, having just seen this list, I was struck by how vexed any nude still is in our culture—all the, er, details of the featured male nudes from the Guardian’s list were delicately cropped or draped.  Neruda’s nudes are definitely nude—a lovely openness.  Of course, the first Neruda book I owned was Full Woman, Fleshly Apple, Hot Moon.  Come on—you gotta love that. 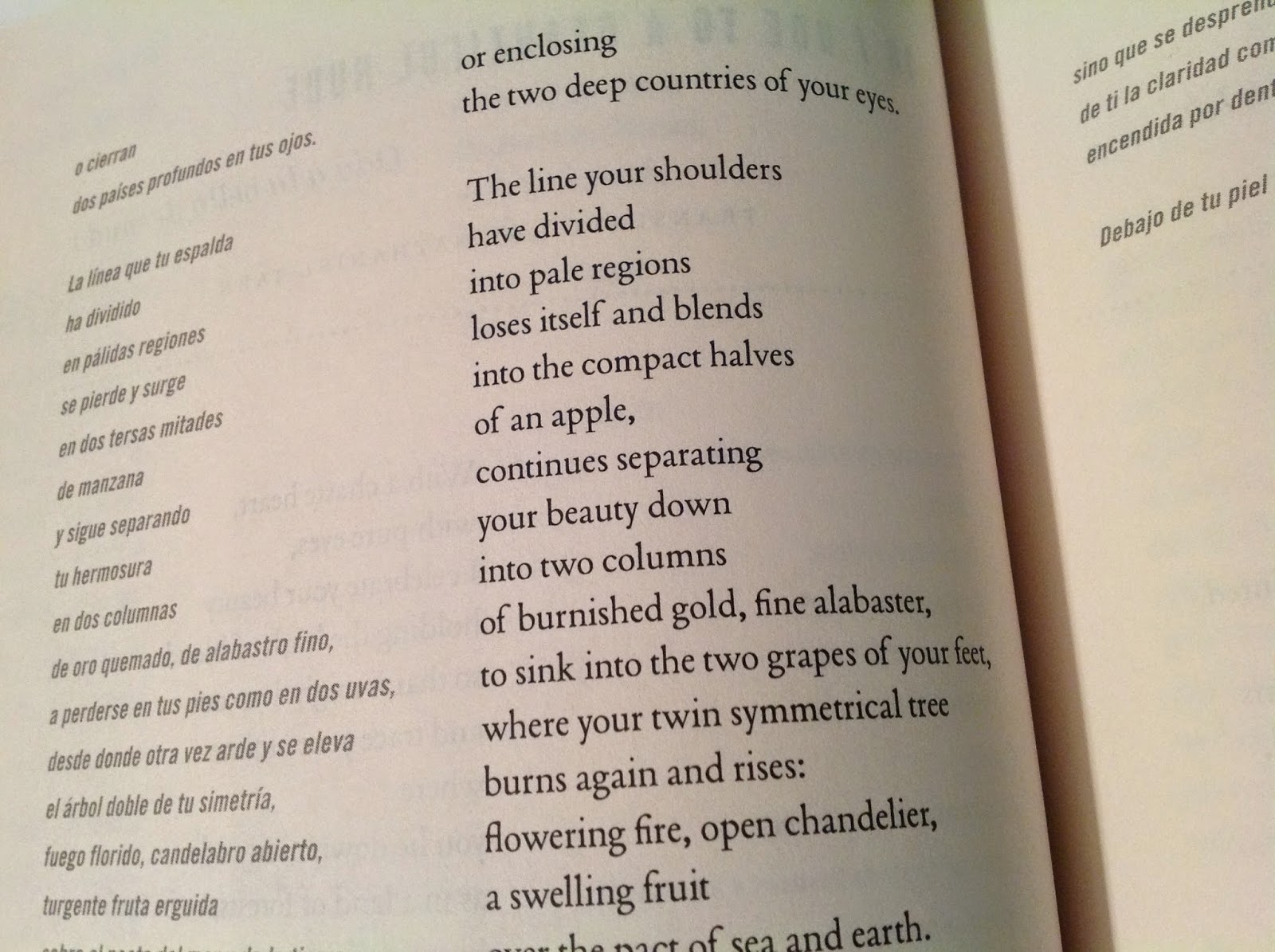 “Ode to Barbed Wire” sent me straight to Ron Rash’s collection, Raising the Dead.  A lovely, haunting collection.  Neruda is making more of a political commentary with his barbed wire than Rash, who seems to me to be writing about the pervasiveness and the bite of memory, the mark we make on the land.  The voice of the land speaks in both poems, though. 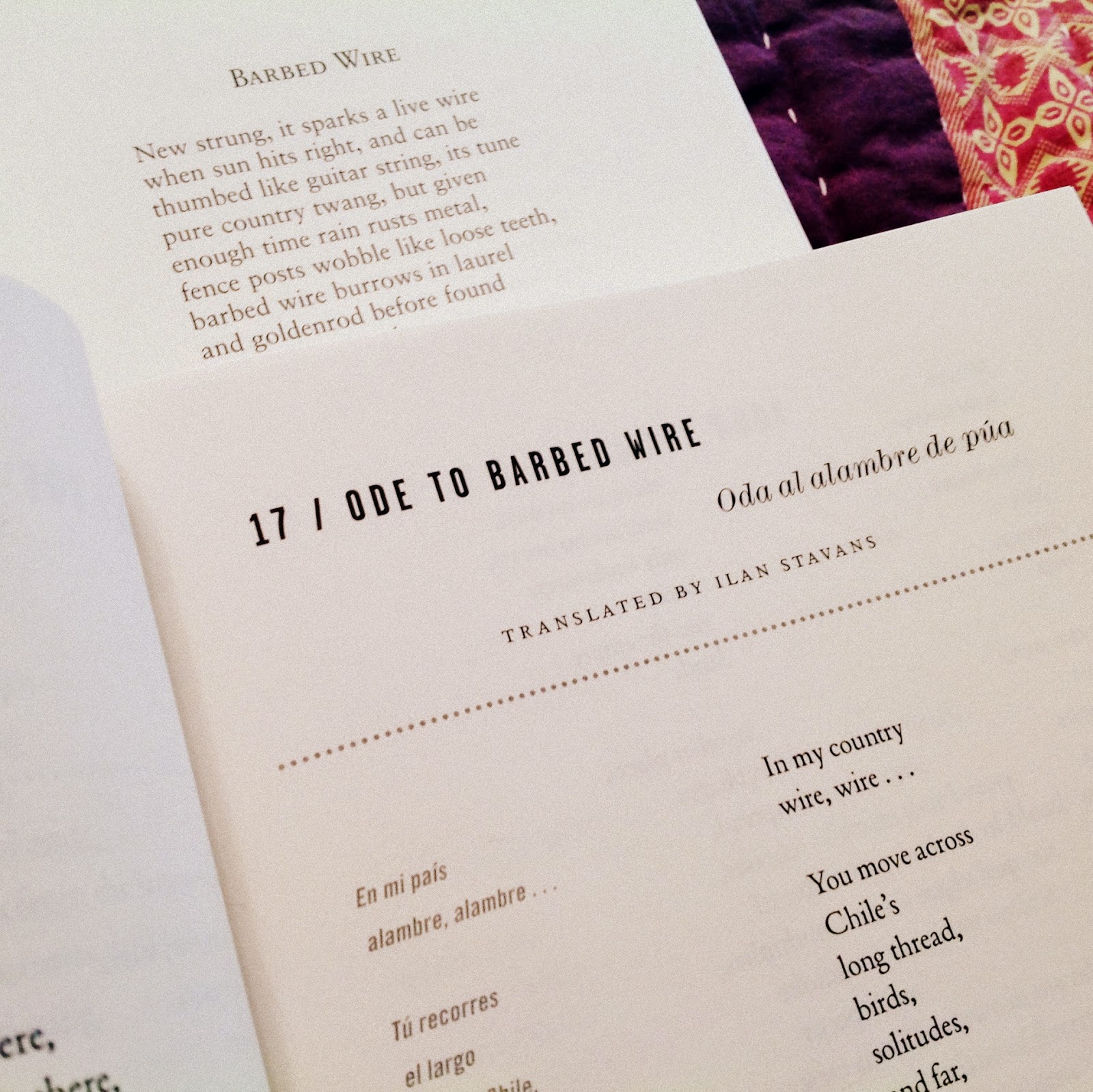 "Ode to the Bad Blind Man"

How remarkably not postmodern! 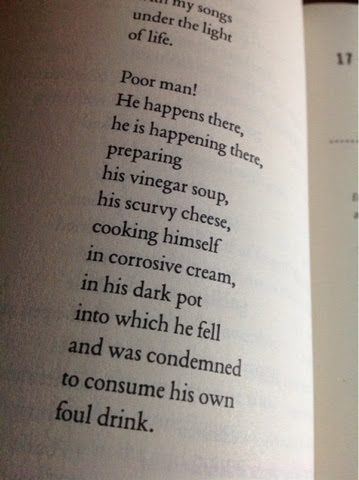 This is not a Neruda poem! And doesn’t entirely explain my lack of follow-through on this year’s NPM project—but it does go a ways.  Of course, I don’t know how to read this since nothing is visibly broken, but take my word for it—it’s all very ouchy.

Well, I’ll try to get back to my poems tomorrow.  And in the meantime, did I say Ouch? 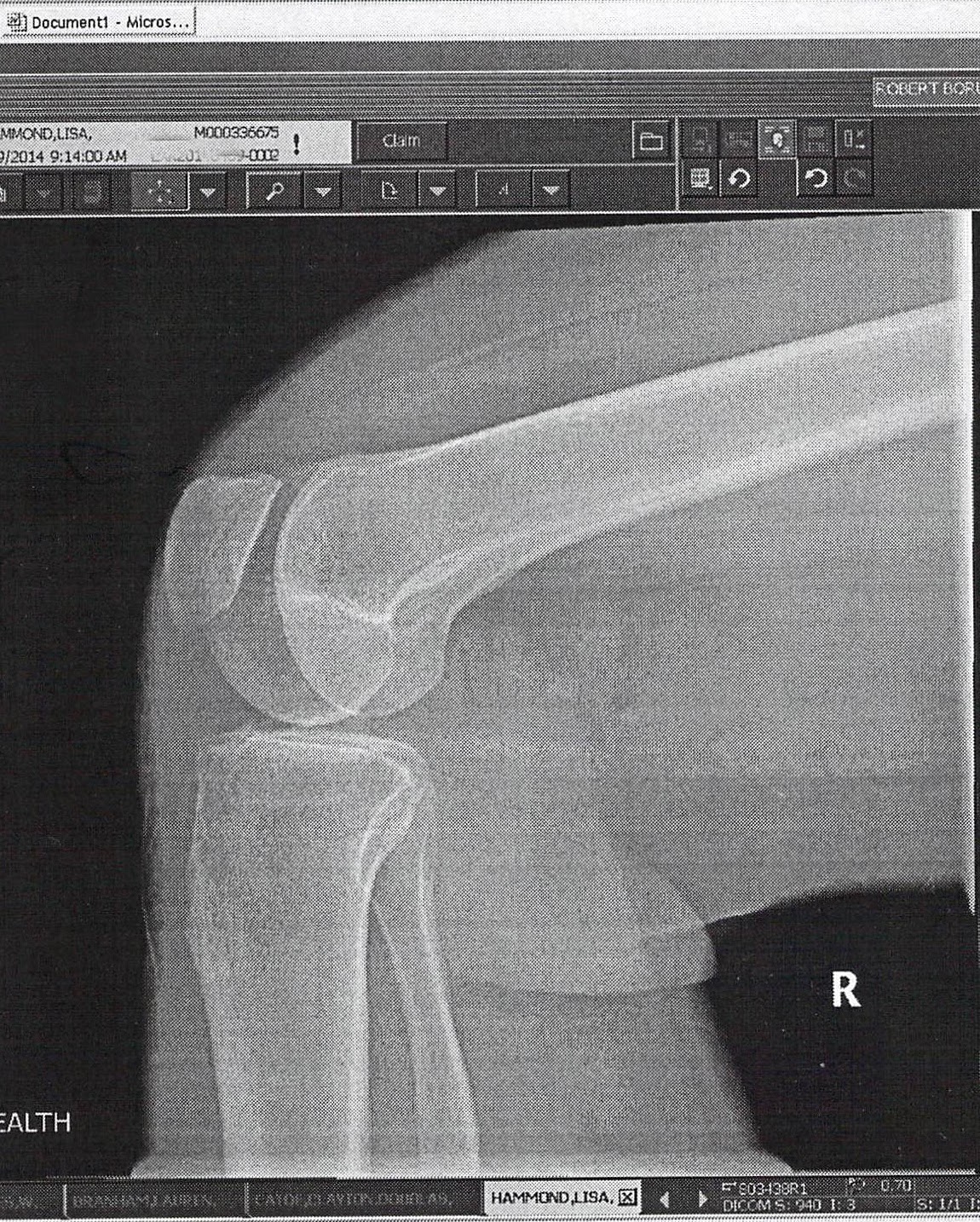 Neruda had an anchor in his garden.  Just this weekend while I pruned shrubs, my husband and son cut a yellow jasmine down to a stump.  We have to dig it out later—we do yardwork in little bits, I imagine much to the dismay of our neighbors.  But we got down past the old chair that originally was the foundation for the jasmine to climb—now a pile of rotted sticks.  Neruda’s anchor must have fared better, a little more permanent, as the bindweed crept up “her freshness” while he waits for the day “carnations will flower / in her terrestrial dream.” My favorite part—

suddenly she believed
a ship’s tremor
awaited her,
sonorous chains
awaited her

The transplanted anchor, pulled from the shipwrecked depths, dreaming herself of the ocean, Neruda dreaming it for her.  Wonder who inherited his anchor? 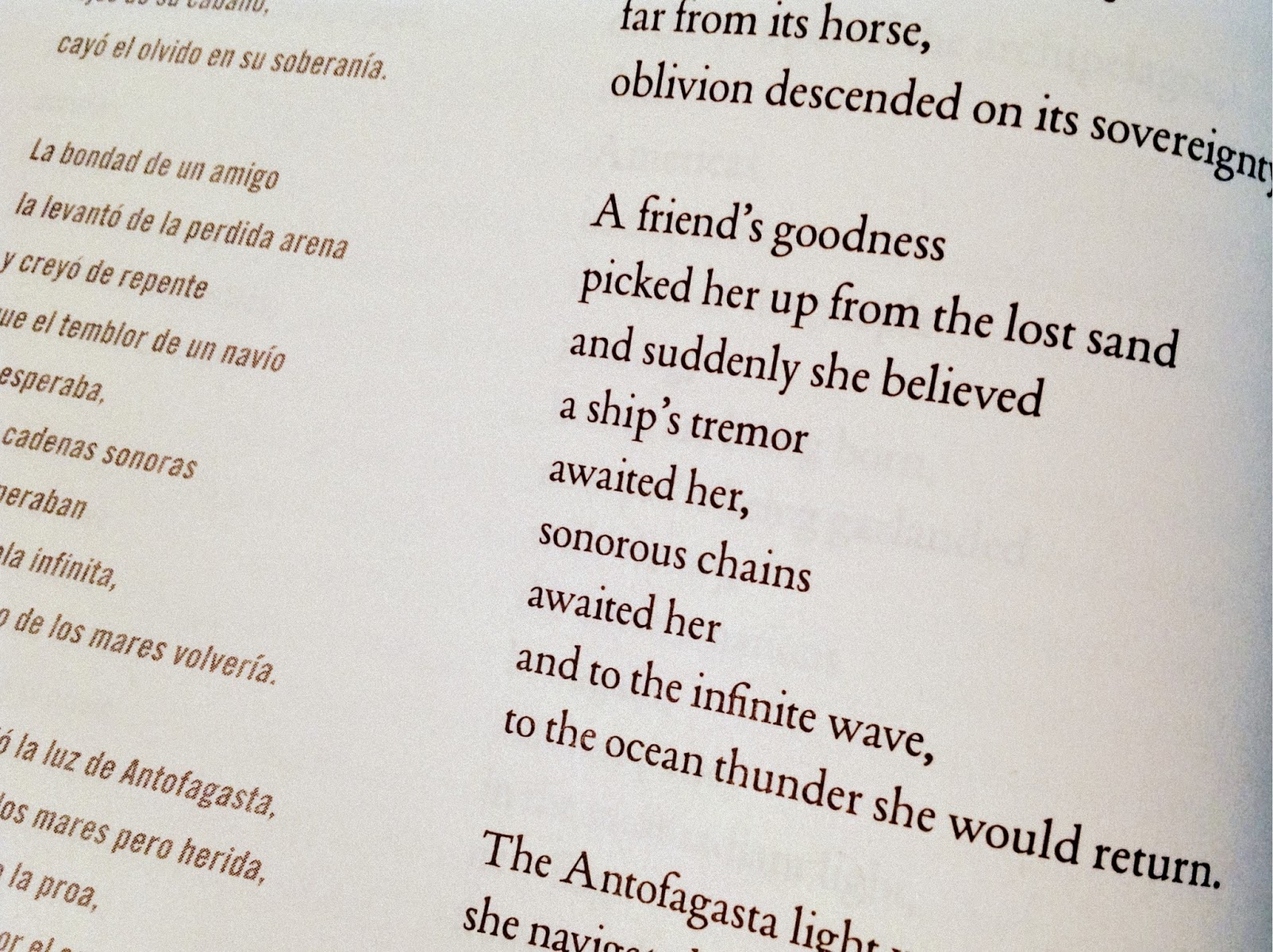 Odes to the Air and the Americas

Of the two, I liked “Ode to the Air” better—political poetry often puts me off a bit, though I don’t know exactly why—it’s certainly an interesting genre.  Nothing much in the Americas poem really grabbed me, but I did enjoy in “Air” the interplay between the air and the speaker, and the way the speaker complained about water and light selling themselves out.  So air refuses to be contained, instead romping all around with the narrator,


bringing down the flowers
of the apple tree
entering through windows,
whistling.

I was reading when the cats came to visit to help me watch the birds, the window open; “let’s go / where a new spring / is flowering,” the narrator told the air and me and Juno and Sylvie, and we watched the birds and felt the air together. 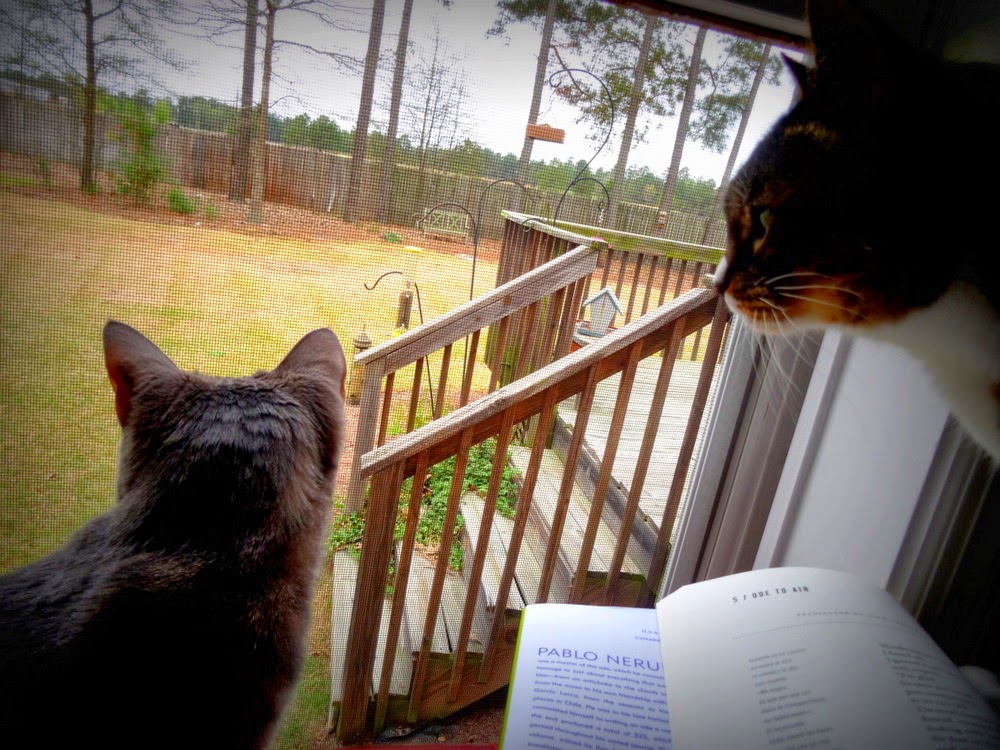 “All that the sirens had forgot”

Today’s poem has interested me in the book itself—how it’s put together, how the poems were written, what sort of notes and critical apparatus we have here. Called “Ode to an Aged Poet,” the poem describes the subject “hurrying towards death,” and I started to wonder—is Neruda the aged poet himself? is this some sort of imagined dialogue? or is there a real aged poet? I found notes that let me know that an upcoming ode to an anchor is written about Neruda’s very own anchor (and where that anchor came from), but no word on the AP. The anchor poem brought me to the realization that the odes were arranged alphabetically too, which sort of made me sad as I imagined they’d be in the order they were written—except I should have been smart enough to know that the poor editor probably would never have been able to tell exactly how to order poems that way and alphabetical probably looked like salvation to him.

At any rate, the book jacket notes that Neruda “was in his late forties when he committed himself to writing an ode a week”—so I imagine he is not the aged poet after all. And this gives me hope, that as a poet in my late forties I might start something new—and I wonder if committing to a project like this means that he actually managed to write an ode every week without missing. My own writing is really suffering this semester since I lost my accountability partner—a woman in Texas I called at 8:30 every morning so we could tell each other what we were going to write today and whether we managed it the day before (and no, I didn’t bore her to death; she got to busy to keep up the calls). Neruda probably didn’t need an accountability partner, though I guess he probably wasn’t teaching full-time either. Then I wonder, did Neruda have a day job? And research yields my answer and more—he was a diplomat! Pablo Neruda was a pen name! So many things you can find out all from wondering about an aged poet! This post feels very random, and probably is very random—it’s been a long day in a long week, and I’m not sure anything much makes sense to me tonight. My kitty helped me read my mail and today’s poem, though, and she seems to think random is just fine for now—I’ll buy that. 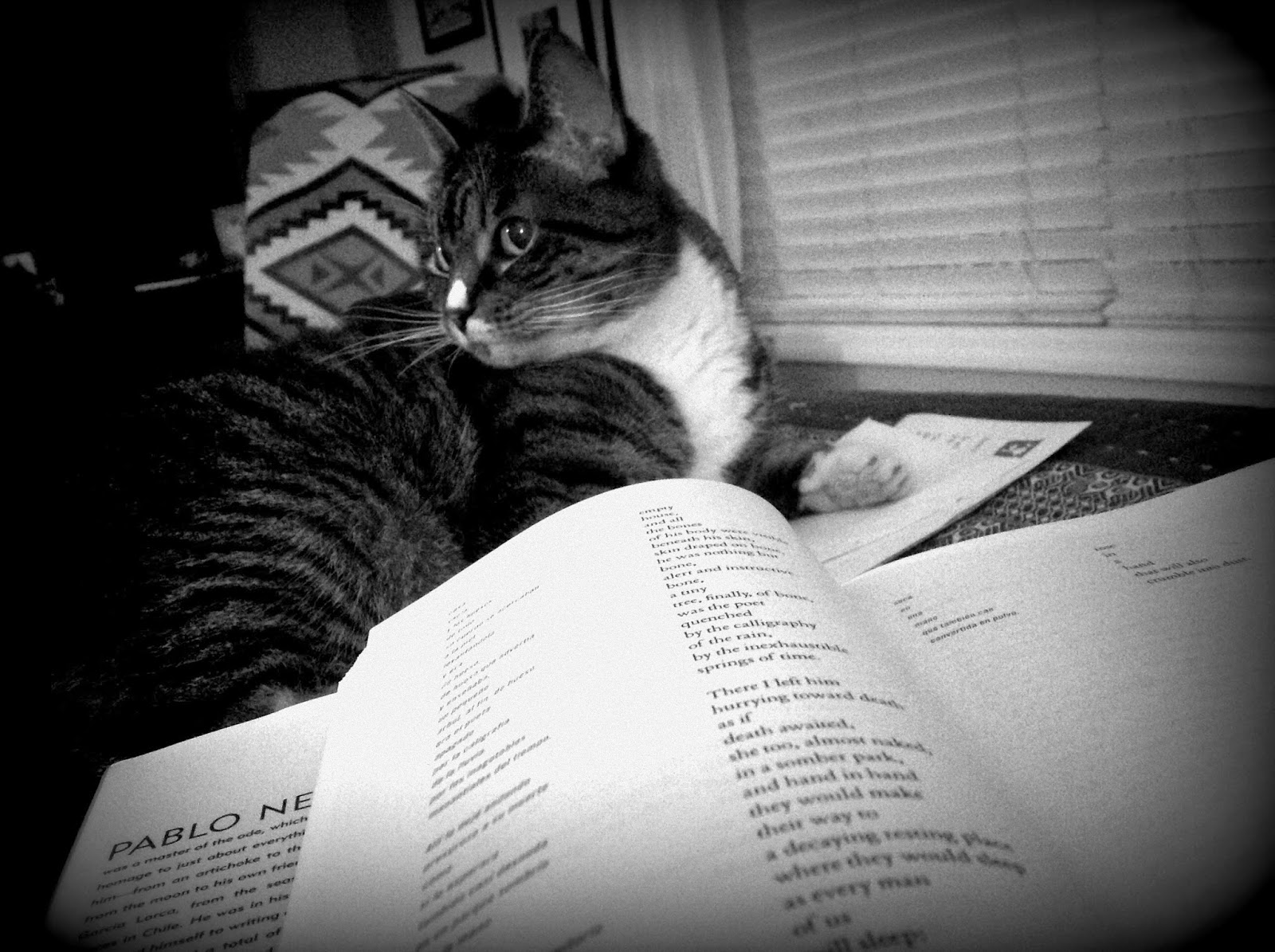 Our poet contemplates age today. One thing I love about Neruda is how bald he can be, but the work (for me!) carries that baldness off. “I don’t believe in age,” Neruda declaims in the first line of “Ode to Age,” and as someone who is aging happily (and well, I hope!), I’m inclined to agree. “I proclaim you / path / and not shroud,” he writes, and I love that image (while agreeing that it is not stunningly original).

My favorite thing about “Ode to Age,” though, is that Neruda made the mistake (I would argue) that all poets make, letting his poem linger on a line or two too long. It’s so comforting to see someone else in this leaky poetic boat. I’ll let you look up the last couple of lines yourself to see if you agree with me—but here’s where I’d have ended:

Now,
time, I roll you up,
I deposit you in my
rustic box
and I leave off to fish. 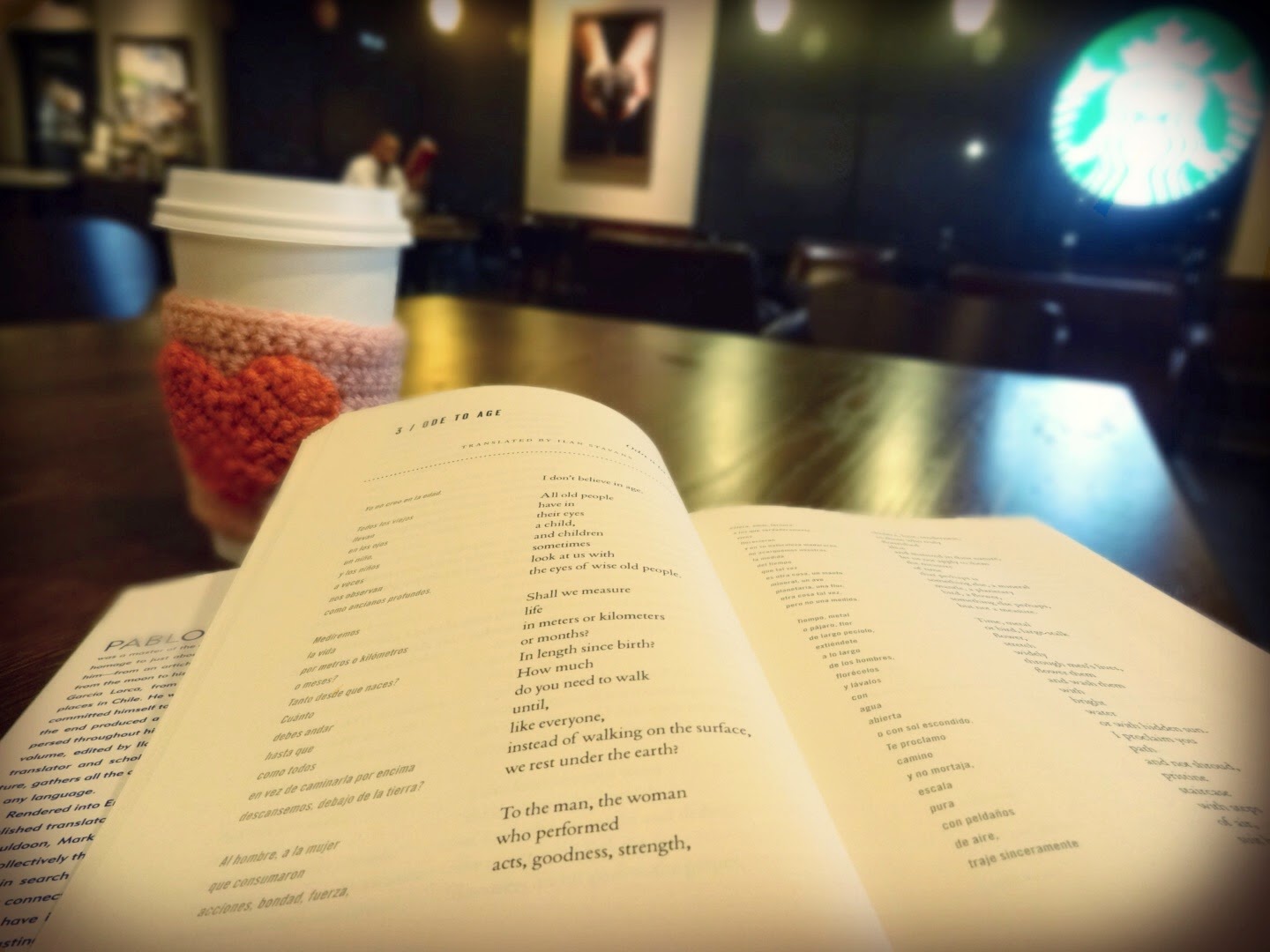 Today’s poem is “Ode to Acario Cotapos.” The gentleman in question seems to be a political revolutionary, a leader, a teacher or a prophet for Neruda. I did try briefly, in the five free seconds I had today, to look him up, but Wikipedia failed me! Even the Spanish Wikipedia didn’t help. Now there’s probably some discussion of this in the long lovely introduction to the book that I haven’t read yet, but obviously, I haven’t read it yet.

So this becomes a good opportunity for me to remember what it feels like when, as a student, you have absolutely no idea what the heck is happening in a poem. In fact, I really just enjoyed it while having no clue who any of these people are or what they’re actually doing, or even if they’re real. But I know that enjoying without understanding is something of a luxury—I don’t have to know. Students always feel they’re performing, and mostly they are, just like I’m performing in teaching, and they often fear not knowing—but the play, the not knowing and wondering is such a lovely part of my own intellectual life that I wish I could figure out how to help students feel more comfortable with that sort of freedom. I wish I could tell you, students—we all don’t know. We all feel like somebody’s going to find out we’re not smart enough to be here. Every one of us.

Now, I could find out all about this poem—who are these “diminutive Bolivians”? I could—but not today. And to tell the truth, I’m a little leery of knowing. What if Acario Cotapos is some awful person and then I can’t love Pablo Neruda anymore? (This happened recently when I found out that Michelle Shocked, a musician whose work I loved, is not somebody I can respect or admire. Now what?) Instead, for now, I’m going to enjoy the play of the words and the crazy looseness of following along without fully understanding, just enjoying that loopy image of that “irascible corpulence”—and especially “Ramón with his serious squid.” 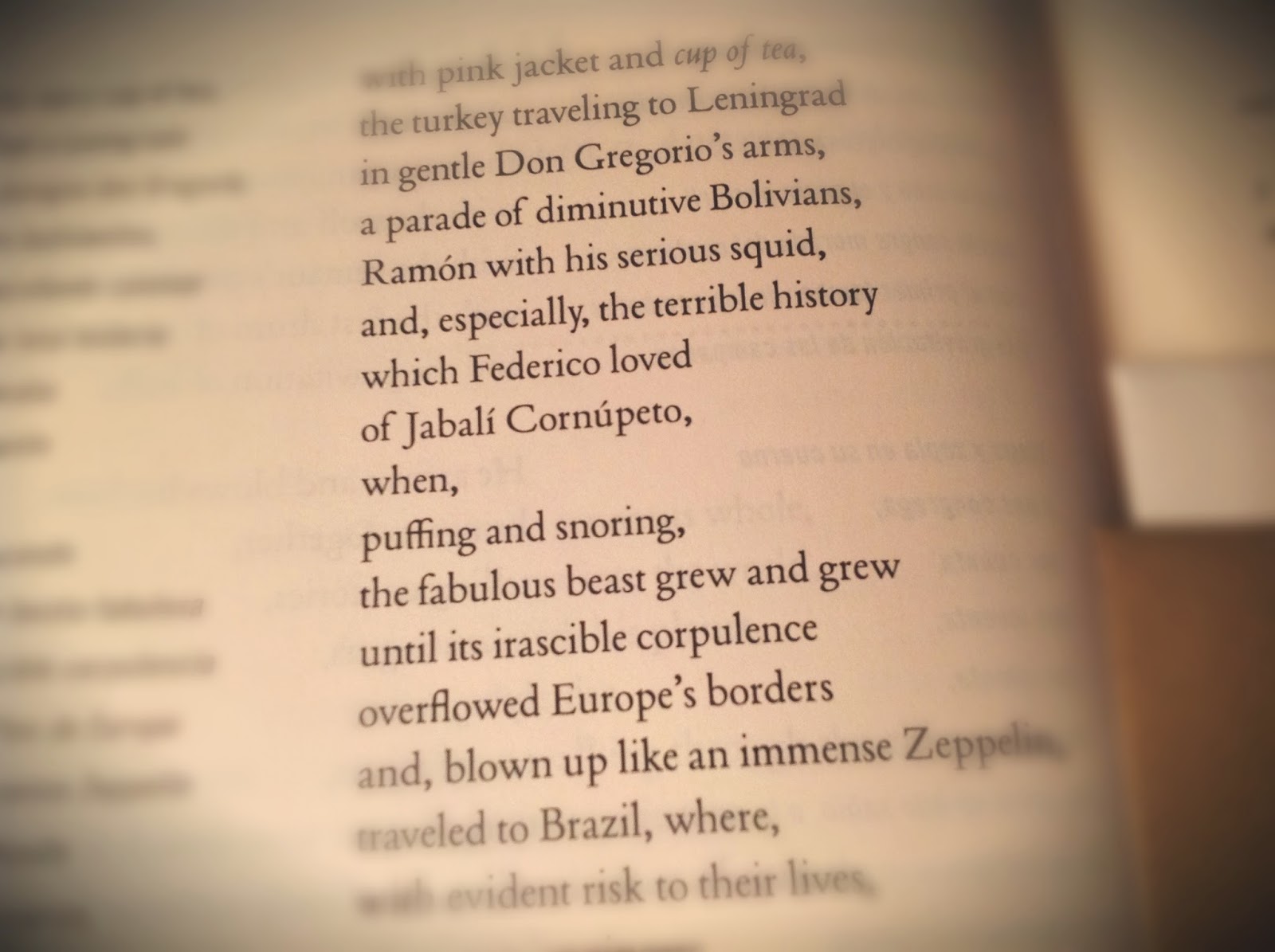 April again! A perfect excuse to read a poem a day! Last month at the fabulous eighteen-miles-of-books Strand Book Store in New York, I found a copy of Pablo Neruda’s All the Odes. I adore Neruda’s work, so my project this NPM will be to read one daily. A pretty low bar, but one I think I can make. Today’s poem is “Ode to an Abandoned House,” which actually reminded me of some of what I was trying to do in my own chapbook Moving House. Much more than that, it brought to mind that lovely heartsore Philip Larkin poem, “Home is So Sad.” The goodbyes in Neruda’s poem aren’t quite so final, but the images in the two poems definitely resonate. A lovely start to the month. 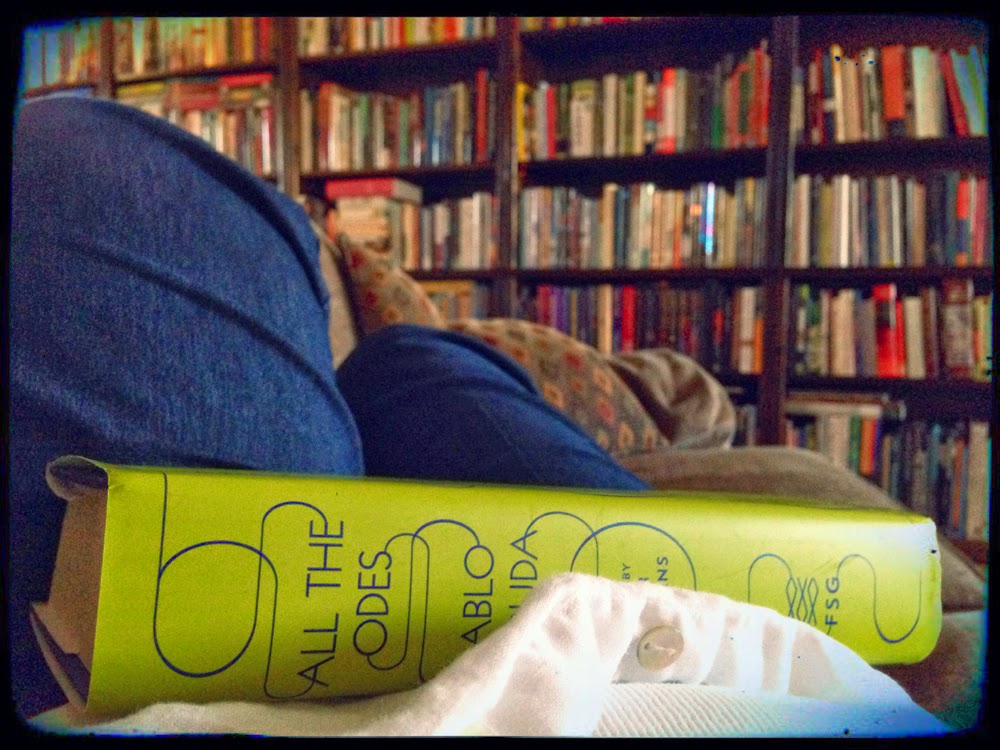