I am obsessed with this new album.

I’ve had my history of album obsession, starting with wonderfully disgraceful pop music: Donna Summer’s Bad Girl and the soundtrack to Grease during my tween years (though nobody had ever heard of tweens back when I was one). My guy friends apparently all spun Pink Floyd’s Dark Side of the Moon while I belted out Natalie Cole’s Unforgettable until I found the real thing, Ella Fitzgerald’s The Best of Songbooks (I have the complete songbooks now, thank you God!). Sheryl Crow’s eponymous second album echoed late in the empty office hallways during the years I worked on my tenure file, with me singing along way too loud. And there were the Michelle Shocked Arkansas Traveler days, and the days I played nothing but Atlanta Rhythm Section’s Champagne Jam, and She & Him Volume 2, or the Dixie Chicks’ Fly.

Suzanne Vega’s Retrospective haunted me during my divorce; Jack Johnson’s In Between Dreams became my anthem for a new and more complicated life, and my second husband and I debated over “Better Together” for our wedding dance before settling on Ella Fitzgerald’s “I Could Write a Book.” We listened in bed to Sarah McLachlan’s Wintersong over and over again. I only need to hear the first chords of a song from one of those albums to be back for a moment in that time, remembering working too late too many nights, remembering that dark Christmas Day that I realized I would be divorced soon, remembering that later giddy Christmas when my old friend courted me with chocolate and roses and music.

A song is a fun little fling, but an album is a full-fledged love affair. I’ve flirted with individual songs like Pink Martini’s “Hang on Little Tomato” and Death Cab for Cutie’s “I Will Follow You into the Dark.” And compilations! and playlists! I have a not-so-secret and pretty seriously bourgeois fondness for compilation cds from Williams Sonoma and Pottery Barn and Starbucks. I love playlists and make one every Valentine’s Day for my husband, and I add every year to my famous Halloween party playlist, spreading songs around me like photos for an album and choosing only the most wonderful. Still, a playlist isn’t an album and never will be, and I can love a song without giving it my heart.

People of my generation (oh my God! I’m old!) have a special relationship with albums, one I sometimes think my children and my students can’t fully understand, growing up as they have in the perpetual earbuds-iPod-mp3-Pandora-Spotify world. Just like most of my students have never read a collection of poems written by a single author, they seem to have a different experience of music, one that seems more scattershot to me, but also somehow more fundamental—they live their lives immersed in an perpetual stream, eddying from old favorites to new music in way I can barely begin to imagine.

I’ve ventured into that brave new world and love it too—but the album! especially vinyl! turning the album to the B side, the hiss of my not-very-good record player still a part of my memory of those old songs. The album, the perfect whole, each song a beat in the heartbeat of the whole.

My husband is interested in the music in music; I’m interested in the words. Once as we listened to the Beach Boy’s “Good Vibrations,” Hayes said “Listen to that cello, how it comes out in the mix towards the end,” and I said in surprise and without thinking, “Are there instruments in this song?” I hear the music too, of course, but when an album rockets to the top of my personal charts, I learn the lyrics first and fast. I can’t sing—though of course that never stopped me—but if I can’t sing along with an album even in my own limping way, if the lead is too deep or too high, I’ll never love that album quite the same way. Ibrahim Ferrer’s Mi Sueño is so lovely, but I’ve forgotten so much of my Spanish now that the best I can do is hum along, and so that album has never risen to the true heights of cult following for me.

A friend who knows I love poetry and music and literature and mythology sent me a link to Anaïs Mitchell’s Hadestown—listen, he said, to this, this folk opera, this retelling of the Orpheus and Eurydice myth. And I listened, and listened, and have listened since August to Orpheus’s multivoiced epic desire, to Eurydice’s sweet longing, to Hades’s deep-throated swagger, to Persephone’s earthy jazz, to Hermes’s scratchy hobo tenor, to the Fates' bright harmonic cynicism—to this myth of the grand but always already doomed quest to bring back love from the dead.

The 2010 album was presciently set in darkness and poverty, the songs written well before the recent US economic slump, and in that setting we see the first and really most substantial departure from the myth. Eurydice is blameless in the classic tale, dying from a snakebite on her wedding day to Orpheus. In Hadestown, though, Eurydice is a woman deeply conscious of the precariousness of her situation, and that anxiety becomes her downfall. In the first piece in the album, “Wedding Song,” she asks Orpheus repeatedly how he will provide for their wedding and their marriage, “Times being what they are / Hard and getting harder all the time.” Orpheus blithely assures her that the river will provide gold for the wedding rings, the trees the food for the wedding table, the birds the feathers for the wedding bed, but Eurydice’s questioning foreshadows her fall into Hadestown.

Eurydice’s yearning for both love and safety resonate profoundly throughout this album, and her unease about her possible life with Orpheus echoes even in her declarations of love for the poet. She is fascinated with Hadestown and its overlord, a world so beguiling and flush that she sees only “Everybody sipping ambrosia wine.” While Orpheus and Hermes warn her that “Mister Hades is a mean old boss,” she sees only the “goldmine” that is Hadestown, not the “graveyard” they try to show her. She is tempted by the prosperity of Hadestown, ending the song “Way Down Hadestown” with her frank desire to be secure:

Mr. Hades is a mighty king
Must be making some mighty big deals
Seems like he owns everything
Kind of makes you wonder how it feels

The plaintive tone of her song here makes it hard to blame her for what we know already will be her seduction by Hades. In one of his most important songs, “Hey, Little Songbird,” Hades plays expertly on Eurydice’s uncertainly and need; such a “pity for one so pretty and young,” but “nobody sings on empty,” he assures her. She wavers, wanting what we all want, “a nice soft place to land,” and calls out a lament to Orpheus, whom she clearly loves. But Orpheus is nowhere in evidence as Hades draws a grim portrait of her life with her artist husband:

Hey, little songbird, let me guess
He’s some kind of poet—and he’s penniless
Give him your hand, he’ll give you his hand-to-mouth
He’ll write you a poem when the power’s out
Hey, why not fly south for the winter?

And so Erydice slips into the afterlife in “Gone, I’m Gone,” giving Orpheus her heart but telling him “It’s my gut I can’t ignore / Orpheus, I’m hungry.” This grim vision of the life of the artist is something about this album I find compelling—I gotta say, poets don’t get much respect or cash in this world, and nobody knows that better than Hades.

But what I love most about this album is the profound way Mitchell retells and transforms the story, honoring it and making it live again. I’ve been working for years now on a collection of poems imaging the life of a goddess in contemporary American, and translating a myth is hard work—or at least I have found it very hard. Fascinating, compelling, rewarding—but really damn hard. I adore Mitchell’s Persephone—her loveliness, her confidence, how smoothly she moves between the ancient myth and today’s world, as a goddess should. In her largest moment in the album, “Our Lady of the Underground,” Persephone sings in a speakeasy, offering the men of Hadestown a forbidden taste of their earthly lives. She knows their despair and longing as only the Queen of Underworld could: “I don’t know about you, boys / But if you’re like me then hanging around / This old manhole is bringing you down,” she begins the song. She’s “got the wind right here in a jar,” “the rain on tap at the bar,” and in lovely moment of contemporary mythmaking, she’s got the moon “right here waiting in my pay-per-view.” Mitchell’s lyrics are superb, and Ani DiFranco performs Persephone’s silky croon with an elegance that is as seductive as the lady herself. Persephone’s power has its bounds, but she embraces that power fully; while Hades is the king, she is his wife, and it is her love for her husband and her pity for Orpheus—and Hades’s love for her—that allows her to persuade Hades to give Orpheus his chance to reclaim Eurydice. Though we know the attempt will fail, she earns him the grace of the chance. As Orpheus sings of the moment Hades first saw Persephone, we are pulled back into the ancient Greek world, but these epic figures have stepped into our world today and made that myth new again—no mean feat, given how often Orphues’s tale has been revisited in literature and art.

I’ve been listening to Hadestown pretty much daily for the last two months. In that time, my own poor goddess has been closed up in her notebook, her poems neglected, while I grade papers and argue about curriculum and advise students for their spring schedules, while I attend Senate meetings during the day and Scout meetings with my son at night. She’s languishing, that poor goddess, my poor book. My hour’s commute listening this album keeps me connected to my writing, and I know that this album wouldn’t resonate for me so powerfully if there were not something here I must understand. My goddess tends more towards Eurydice’s longing and grief than Persephone’s strength—and here is where I must look further—but I don’t know yet where this observation will take me.

I believe, though, that one day when I recount my life through albums, when I remember grading papers that year to Yo Yo Ma’s Bach Six Suites for Unaccompanied Cello, and when I think affectionately about my brief new age phase and Songs of Kuan Yin, when I am amazed at how young I was during the Donna Summer days, I will remember Hadestown with more than my usual fondness for the album that represents that period of my life. Hadestown is a masterwork, an elegy to lost love, a gorgeous meditation on the need and doubt we all struggle with each day. Listening to this music, I am Eurydice, I am Persephone, I love Orpheus, I want Hades, and I am lost—but somehow still myself. Only in the greatest art do we recognize ourselves and transform ourselves. 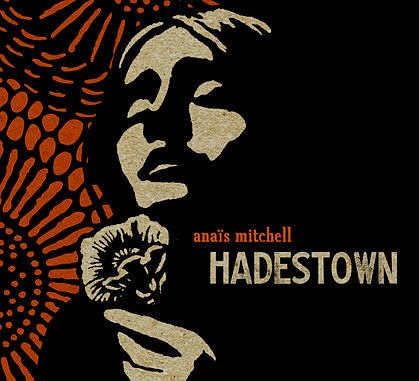